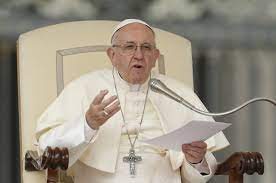 President Muhammadu Buhari has sent a get-well message to the Head of the Catholic Church, Pope Francis as he heads in for a scheduled surgery of the colon.

The president’s Senior Special Assistant on Media and Publicity, Malam Garba Shehu, confirmed this in a statement in Abuja on Sunday.

Buhari called for prayers from Nigerians and the global community as the Pontiff goes in for this routine operation.

Pope Francis was admitted to hospital in Rome for scheduled surgery on his large intestine.

The news came on Sunday just three hours after Francis had cheerfully greeted the public in Saint Peter’s Square and told them he will go to Hungary and Slovakia in September.

The brief statement from the Holy See’s press office did not say exactly when the surgery would be performed at the Gemelli Polyclinic, a Catholic teaching hospital, only that there would be a medical update when the surgery is complete, reports Aljazeera.

But the Vatican indicated later that the surgery would be the same day. It was the pope’s first known hospital treatment since he was elected to the papacy in 2013.

The Vatican said the 84-year-old pope had been diagnosed with “symptomatic diverticular stenosis of the colon”, a reference to a narrowing in the large intestine.