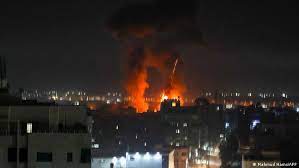 The Israel Defense Forces, IDF stated that it struck targets in Gaza overnight on Wednesday.

But reports in Palestine said the airstrikes in Khan Younis only resulted in material damage as no life was lost.

The airstrikes were the first in Gaza since a ceasefire went into effect nearly one month ago.

The IDF said it struck Hamas military complexes and meeting places for the Khan Younis and Gaza brigades.

The attack, a first test for Israel’s new government, followed a march in East Jerusalem on Tuesday by Jewish nationalists that had drawn threats of action by Hamas, the ruling militant group in Gaza.

The Israeli military said its aircraft attacked Hamas armed compounds in Gaza City and the southern town of Khan Younis and was “ready for all scenarios, including renewed fighting in the face of continued terrorist acts emanating from Gaza”.

The strikes, the military said, came in response to the launching of balloons laden with incendiary material, which the Israeli fire brigade reported caused 20 blazes in open fields in communities near the Gaza border.

A Hamas spokesman, confirming the Israeli attacks, said Palestinians would continue to pursue their “brave resistance and defend their rights and sacred sites” in Jerusalem.