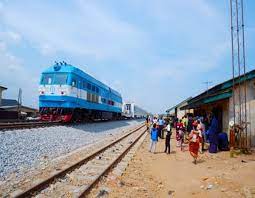 The Minister of Transportation, Mr. Chibuike Amaechi, yesterday, said that the Lagos-Ibadan railway project was ready for commissioning today by President Muhammadu Buhari.

This was as he urged the Nigerian Railway Cooperation, NRC to buy off close buildings to the Apapa train station to increase the parking space at the terminal.

Speaking to journalists at Apapa during the final inspection of the Lagos-Ibadan railway project, Amaechi who was later joined by the Executive Governor of Ogun state, Dapo Abiodun, expressed satisfaction at the quality of work done by the contractor, the China Civil Engineering Construction Corporation, CCECC.

Meanwhile, the Federal Government has named three of the railway stations after past governors of Lagos state, as a means of appreciation for their contributions towards national development and also the development of the state.

The Ebute Metta station was named after Mobolaji Olufunso Johnson, Apapa railway station after Bola Ahmed Tinubu, while the Agege station was dedicated in honour of Babatunde Fashola.

Asiwaju Bola Ahmed Tinubu governed Lagos for eight years, spanning 1999 and 2007; and handed over to Babatunde Fashola, who also governed for eight years and left office as Governor in 2015.

A final inspection of the Lagos-Ibadan rail project by the Minister of Transportation yesterday revealed that the project is now ready for the occasioning.

However, the China Civil Engineering Construction Corporation, CCECC, was still on site putting finishing touches in some of the stations visited.

Speaking during the tour, the Ogun State Governor, Dapo Abiodun, said that the Lagos-Ibadan Standard Guage rail project was an opportunity for the Federal Government to provide an inter modal transportation system to the people.

He however, said that some observations made in the course of the inspection such as the slow speed of the train and security, and the need to enhance the access route for passengers would be addressed.

“It gives me a lot of joy to join the Minister on the inspection of one of the five stations along the Lagos-Ibadan railway line that has been implemented by the Buhari administration” he said.