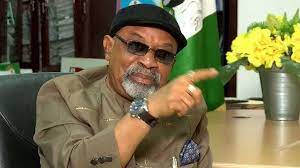 The Federal Government has directed members of the striking Judiciary Staff Union of Nigeria, JUSUN and the Parliamentary Staff Association of Nigeria, PASAN to urgently re-open all the courts and the State Houses of Assembly so that the May 20, 2021 Memorandum of Action, signed by all parties and further reinforced by another meeting on implementation of timelines on June 4, can take effect.

In a statement in Abuja  on Tuesday, the Minister of Labour and Employment, Senator Chris Ngige decried the situation where the courts and the State Houses of Assembly are still shut down across the federation for no cogent reasons of non-adherence to the provisions of  the May 20 Memorandum of Action which has 45 days implementation window.

“The Federal Government has sadly noted that   the MOA between all the stakeholders involved in the JUSUN/ PASAN strike, mainly JUSUN/PASAN, Governors’ Forum and the Presidential Implementation Committee is yet to take effect because of non-compliance by parties.

“We note that the strike has not been called off as of noon, today, June 8, 2021, leading to courts and various State Houses of Assembly still remaining under lock and key contrary to the promise made by the two unions at a further dialogue which was attended by the President of the Nigerian Labour Congress.

“Unfortunately, all federal courts have remained closed notwithstanding the fact that the Federal level of Government operates a financial autonomy of the judiciary through the National Judicial Council, NJC and the National Assembly through the statutory transfer lines.”

The statement noted that  many Governors are desirous that the State  Assemblies be opened so that they can enact  the  laws meant to give  effect to the autonomy as enshrined  in the MOA “ but we have advised all state governors that have consulted  with their  heads of judiciary and legislature  to go ahead and credit the accounts of judiciary and legislature before fine-tuning the laws.”

“We are worried and therefore wish to appeal for the last time to all parties involved in the signed agreement to abide by its spirit and letters, by firstly re-opening all the courts and the State Houses of Assembly so that all other ingredients in the MOA can be given full compliance by all parties concerned.

“This much was agreed to between JUSUN/ PASSAN and the Governors Forum at the last meeting on Friday, June 4, 2021.”

The Minister noted that with the courts closed, the police and other security agencies cannot prosecute criminals, hoodlums and bandits even as the nation is faced with heightened insecurity.

The Statement added that the Ministry will not be happy to be pushed into invoking sections of the Trade Disputes Acts capable of eroding all the gains made so far in the negotiations since May 6, 2021.