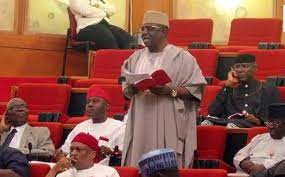 No fewer than 59 out of 114 ministries, departments and agencies of the federal government have been indicted by the Senate Committee on Public Accounts.

This is even as 46 others were cleared by the panel chaired by Senator Matthew Urhoghide (PDP Edo South).

The committee took the decision following the conclusion of Part 1 of 2015 Office of Auditor General for the Federation, OAuGF report which was slated for consideration yesterday according to the items on the Order Paper, but later deferred till further notice.

According to the summary of the report cited by our correspondent, all the 59 MDAs had earlier been queried by the OAuGF for one financial wrongdoing or the other.

The report shows that the affected establishments had their queries sustained with recommendations for consideration and approval of the upper legislative chamber.

In considering the report, the committee invited all the MDAs queried, out of which 84 made submissions and appeared before it to defend the queries raised against them.

The report revealed that 21 MDAs sent a written response to the committee, but did not appear before the hearing while seven others neither made a submission nor appeared before the panel.

It further stated that two of the MDAs reported to the committee that the Economic and Financial Crimes Commission, EFCC or the Independent Corrupt Practices and other related offences Commission, ICPC or both were in possession of the original copies of their documents.

They, therefore, explained that this could not make them respond or appear before the committee.

It would be recalled that the panel had last week threatened to issue a warrant of arrest on officials of the Petroleum Product Pricing Regulatory Agency, PPPRA; Nigeria Social Insurance Trust Fund, NSITF and 54 others government agencies over failure to appear for an investigative hearing.

Secretariat of the committee was thereafter directed to write the agencies involved to appear unfailing latest by yesterday, Tuesday to avoid invocation of relevant sections of the Constitution against them by the Senate.

The committee chairman said based on audit report, NSTIF alone, has over 50 queries to respond to, saying “it is obvious that the agency is running away from investigation.”