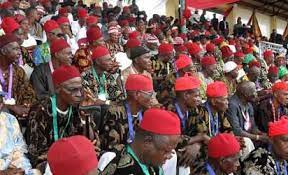 South East caucus of the National Assembly, leaders and other major stakeholders have condemned the ongoing attacks and killings of innocent people in the region, saying “Igbos are not known to kill or waste lives.”

In a statement signed and released yesterday by members of the caucus, which cut across party lines, they expressed worry over “the recent developments in the South East, which has thrown the zone into violence and confusion.”

“We, the South-East caucus of the NASS, as leaders and major stakeholders in the region, have observed with surprise the sudden spike in violence in the region known for its calm, love and peaceful disposition to visitors irrespective of tribe and religion.

“We have had cause always to deploy the instrumentalities of the institution of state to alert the government of Nigeria about some of the vexed issues of injustice, inequity and obvious marginalisation of the South East in governance structure. Nonetheless, we have not lost hope that the authorities will eventually do the right thing for the continued peaceful coexistence of all people in a united Nigeria,” they stated.

“We note the increasing agitation for restructuring of Nigeria and increasing separatist agitations across the country due to perceived and real issues of marginalisation. On these issues,  we, the leaders across-board, have consistently cautioned that such agitations must be strictly in accordance with the laws of Nigeria and must be peaceful and devoid of violence,” it added.

The caucus, however, commiserates with all who have lost loved ones, friends and colleagues in the unfortunate incidents and trust that the country is resilient enough to weather and survive the current challenges confronting it.

“We therefore condemn in its totality the attack on the security personnel and their formations, particularly on the police, INEC, courts and correctional facilities. It is unacceptable and must never for whatever reason be condoned.

“We urge the Inspector General of Police to dig deep in his investigations to unravel the actual identities of these unknown gunmen determined to create a state of anarchy in the South East.

“The investigation has become necessary in the circumstance because of the magnitude of the attacks. More so as the region had not witnessed such in the past.

“We advise the security agencies to continue to show restraint in the discharge of its mission to restore peace in the Southeast. Security operatives must remember, at all times, that the majority of Igbos are opposed to any form of violence in furtherance of any cause,” they stressed.