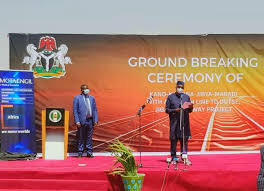 President Muhammadu Buhari, has said that the Kano- Maradi rail line is a viable one that will not only boost economic activities, but will significantly enhance the movement of passengers and freight to hinterland especially of raw materials from agricultural and mineral resources needed for industries.

Buhari stated this virtually at the ground breaking ceremony of the Kano- Maradi Rail line in Katsina State on Tuesday, February, 2021.

He informed that the rail line which transverses territories inhabited by over 80 million people and cuts across 10 States of Kano, Kazaure, Daura, Kastina, Jibiya and Maradi in Niger Republic will not only consolidate trade, which has existed for centuries between the two countries, but will promote Trans-Saharan trade and contribute to the expected gains in the African Continental Free Trade Agreement (AfCFTA).

The President further observed that challenges posed to the nation’s economic growth by the absence of strong and effective rail infrastructure, led his administration to try and bridge the gap by initiating the 1,424 km Lagos – Kano (Western corridor), the Port-Harcourt-Enugu-Markurdi-Maiduguri with branches to Owerri (Imo State), Damaturu (Yobe State), to link deep sea ports in Bonny Island and a Railway Industrial Patk in Port-Harcourt (Eastern corridor).

Others are the Eastern Costal Rail line from Lagos to Calabar, with links to Onitsha, Benin, Warri , Yenegoa, Port- Harcourt, Aba and Uyo, while the Central Railway will transverse Itakpe-Baro-Abuja with connection to Lokoja to link the new seaport in Warri.

The President commended the Construction Firm, Mota-Engil Nigeria Limited for “supporting knowledge and technology transfer by investing in the establishment of a learning institution for Transportation and Railway Science”.

Earlier, the host, Governor of Kastina State, Aminu Bello Masari, commended the President for the laudable feat of seeking to establish an international rail corridor with the Lagos – Ibadan rail line which has been completed with test run currently ongoing.

Masari said the soon to take-off Ibadan-Kano rail line and the now the Kano – Maradi rail project which will transverse across the country, thus easing conveyance of people and goods.

He however appealed to the Federal Ministry of Transportation and Mota – Engil, the contractor to ensure completion of the project before 2023.

In his remarks, the Minister of Transportation, Rt. Hon. Chibuike Amaechi, disclosed that the Kano-Maradi rail line is a single-track standard gauge line with freight yards, rolling stock depots and 15 stations along the rail corridor with major stations in Kano, Kastina, Kazaure, Daura, Jibiya and Duste.

He gave the assurance that the project will be completed in 2023 and deployed to transport 9,300 passengers daily as well as 3,000 metric tonnes of freight between Kano and Maradi.

Elucidating further on the project, Amaechi said that preliminary studies on the Kano-Maradi rail project began in 2012 and the Outline Business Case Certificate (OBC), certifying its commercial viability was obtained in 2015.

He said the Kano – Maradi project is among numerous other government projects and is key to the country becoming a key economic player in the region and the world.

Also speaking, the Chief Executive Officer, Mota-Engil Africa and contractor for the Kano-Maradi rail project, Manuel Mota, assured on timely completion of the project as it will bring about economic development and prosperity.

The representative of the Senate President, the Senate Committee Chairman on Land Transport, Sen. Abdulfatai Buhari, applauded President Buhari for his all-round infrastructural development while also assuring the support of the National Assembly as he seeks to reposition the rail sector.

It will be recalled that the MoU signaling the commencement of the $1.96 billion, 284 km Kano –Maradi plus a 94 km line to Dutse in Jigawa State was signed on 11th January, 2021.