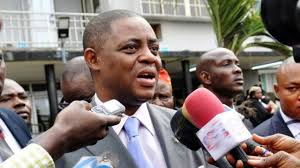 Igboho had in virtual meeting tagged: Townhall with Yoruba in Diaspora, said the Ooni disappointed the Yoruba people for not telling President Muhammadu Buhari the truth when he met with him.

According to him, “When Ooni met with Buhari over the herdsmen issue, Ooni should have told Buhari the truth but he did not. When Ooni returned, he started tackling me to leave the remaining task to the government to finish. You can imagine that kind of talk?

“Alaafin of Oyo has asked me to meet him over the matter. Alaafin should have been the one invited to meet Buhari but since the Ooni was invited, he should be bold to tell the president the whole truth and make the demands of the Yoruba people known to the president.

“The Ooni disappointed himself. Some politicians are behind Ooni’s latest move. He invited me to his palace but I refused to go. I would have gone if he had represented us well but he did not. I won’t honour any monarch who does not cooperate with me. Enough is enough, the Fulani have done enough.”

But Fani-Kayode, on Wednesday evening said he just spoke with Igboho and that he confirmed to him that what he said about the Ooni was said in the heat of the moment.

He said Igboho expressed his regret for what he said about the Ooni, while appealing to the monarch to forgive him.

In his words: “I just spoke with Sunday Igboho and he confirmed to me that what he said about our revered Ooni of Ife was said in the heat of the moment. He expressed his regrets and I was relieved to hear that. To err is human and to forgive is divine. I appeal to Kabiyesi to forgive him.”

Fani-Kayode said for the record, no Ooni of Ife had ever been a slave of the Fulani and that neither would they ever be.

He also defended the Oyo State Governor, Seyi Makinde, saying he is a courageous individual who would never bow before anyone, let alone be a slave to the Fulani.

“For the record let me state clearly & categorically that no Ooni of Ife, whether living or dead, has ever been a slave of the Fulani and neither will they ever be. I can also confirm that my friend & brother Seyi Makinde, the Governor of Oyo state, is a deeply courageous individual who would never bow before anyone let alone be a slave to the Fulani.

“We in the South West remain united in our quest for liberty and justice and in the face of the common enemy and we must move forward as one. No-one can dispute the fact that Sunday has fought hard and done well.

“He has won the respect of all and sundry in Yoruba land and he has inspired millions of our people all over the world. Let us forgive him for this slip and continue to support and pray for him,” he stated.