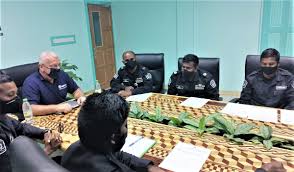 To enhance the fight against maritime crime in the Gulf of Guinea, the United Nations office on Drugs and Crime, UNODC within the framework of its Global Maritime Crime Programme, GMCP has handed over Video Teleconference equipment, VTC to the Nigerian Maritime and Safety Administration, NIMASA with support from the Government of Denmark to strengthen collaboration among various maritime law enforcement agencies.

The event which took place at the Danish Embassy in Abuja, had in attendance the Director General of NIMASA, Dr. Bashir Yusuf Jamoh, and the Danish Ambassador, H.E. Jesper Kamp.

Speaking during the handing over, UNODC National Programme Officer, Francis Izeg Omiunu stated that the essence of this equipment was to foster inter agency cooperation and build synergy among maritime law enforcement agencies in Nigeria.

In receiving the equipment, Director General of NIMASA, Dr. Bashir Yusuf Jamoh, expressed his expectation that the VTC equipment will facilitate information sharing.

According to him, the issue of maritime security is a major concern at both international and regional level as such, all hands must be on deck to fight maritime crimes. UNODC has been supporting the Nigerian Government in its efforts to tackle maritime crime since 2015.

Within this framework, UNODC has been implementing projects aimed at strengthening the “maritime law enforcement response to piracy and maritime crime in the Gulf of Guinea” and the “strategic approaches to maritime security” with funding by the Government of Denmark.

Key Nigerian partners include the Nigerian Navy, the Nigerian Maritime and Safety Administration, NIMASA, the Marine Police, the Federal Ministry of Justice and the Maritime Unit of the National Drugs Law Enforcement Agency, NDLEA .

UNODC through its GMCP has carried out various capacity building programmes for the Nigerian maritime law enforcement agencies to conduct arrests at sea, prepare cases for prosecution, increase their knowledge on law of the sea and legal aspects, including evidence collection, visit-board search and handover procedures.