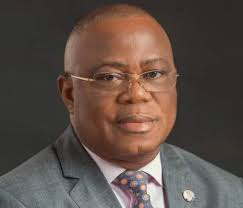 Akwa-lbom State Chapter of the the Peoples Democratic Party, PDP, has mourned the death of its Chairman, Hon. Obong Udo Ekpenyong.

The party also, commiserated with Akwa -Ibom state Governor, Udom Emmanuel, the Ekpenyong family, the PDP fold in the state, as well as the government and people of Akwa-lbom state.

The condolences message was contained in a statement signed by the PDP National Publicity Secretary, Mr. Kola Ologbondiyan, which was made available to IDEALPOSTS.

Ologbondiyan stated that, “the death of Obong Udo Ekpenyong is a shattering blow, not only to our party, the PDP, but also to the nation at large.

The statement read in part: “The Peoples Democratic Party (PDP) is devastated by the death of the Chairman of Akwa-lbom State Chapter of our great party, Obong Udo Ekpenyong.

“The death of Obong Udo Ekpenyong is a shattering blow, not only to our party, the PDP, but also to the nation at large. This is particularly given his manifest sense of patriotism and resilience in the fight for the entrenchment of the democratic tenets of justice, equity, fairness, good governance in ournation.

“Obong Ekpenyong was an exceptionally dedicated administrator, an incomparable team player and grassroots mobilizer, who remained loyal to the ideals of the PDP and made innumerable contributions towards the stability, growth and success of our great party, at both the state and the national levels.

“Our nation has lost one of her bright lights. Udo Ekpenyong spared nothing in working in the interest of humanity as manifested in his selfless service as the Commissioner of Local Government and Chieftaincy Affairs and his sacrificial roles as our state Chairman in Akwa-Ibom state.

“The PDP deeply commiserates with Governor Udom Emmanuel for the loss of Ekpenyong, who was his very close ally that played pivotal roles for the success of his administration in the state and also commiserates with the Ekpenyong family, the PDP fold in Akwa-lbom state, as well as the government and people of Akwa-lbom state as we supplicate to God to give us the fortitude to bear this huge loss.”