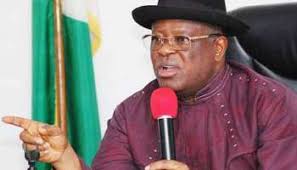 The national leadership of the Academic Staff Union of Universities, ASUU on Tuesday failed to resolve the disagreement between the Ebonyi State Government and the Ebonyi State University, EBSU chapter of the union.

The face-off between both parties had disrupted academic activities in the university and its lecturers have not been paid their salaries for five months.

However, Prof. Emmanuel Osedeke, National Vice-President, Academics of ASUU, who led the delegation to Governor Umahi’s office on Tuesday, said he was disappointed with the reaction of the state governor, who is a visitor to the university.

“We came to discuss issues such as the university’s governing council which was dissolved about two months ago and has not been re-constituted.

“We are not smiling after this meeting because the visitor allowed minor issues of personalities to override the main issues we raised.

“This is the reason for the deadlock as the visitor was busy talking about the university’s ASUU chairman whom, he calls a boy and claims he was insulting him.

“The visitor said that he would, therefore, not relate with the university’s ASUU chairman and we don’t know what next to come,” he said.

He said that the delegation would, however, discuss the development at its congress on Jan. 20 and brief its national body for decisions to be taken.

“The visitor also repeated his threats on the university’s’ ASUU chairman, claiming that he would be held responsible for anything that happens,” he said.

Dr Onyebuchi Chima, the Commissioner for Education in Ebonyi, on his part, said that the governor did not threaten anyone and did not back out from the negotiations.

“The delegation should approach the university’s leadership to get the correct facts before meeting with its visitor.

“The governor’s office is a centre of peace and if one’s presentation does not go according to his points, it does not constitute a threat.

“I am a member of ASUU in the university, I belong and what transpired at the meeting was a show of unpreparedness on the part the ASUU delegation that was fed with erroneous facts,” he said.

He added that neither the state ministry of education nor the office of the Special Assistant to the Governor on Higher Education was aware of the delegation’s visit and faulted such an arrangement.

“No people will own the state more than us as the governor is working hard to develop all areas of the state, including education which I head.

“The sector has the highest allocation in the state’s 2021 budget with 19.5 percent and is to be developed from the cradle.

“We fought and realise the educated ones among us, so we know what education can do for us,” he said.