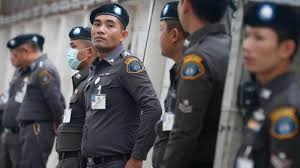 Police in Trinidad and Tobago have arrested a 40-year-old Nigerian national for allegedly attempting to smuggle cocaine into Thailand and India.

This was contained in a statement released by the Trinidad and Tobago Police Service.

According to a statement released by the Trinidad and Tobago Police Service, the suspect was nabbed on January 13th, 2021.

The statement said, 2021, at around 2.15 pm officers attached to the Marabella Criminal Investigation Department (CID), as a result of information received, proceeded to TTPost, Coffee Street San Fernando, where they detained the Nigerian national.

The suspect, a resident of Rueben Lane Enterprise, Chaguanas, reportedly attempted to export a quantity of cocaine to India and Thailand, which were hidden among several fishing reels in several envelopes.

Officers from the said unit under the supervision of Sgt Wilkinson of the San Fernando Operations Unit executed a search warrant around 4.20pm at the man’s Enterprise address, where they recovered 446 grammes of cocaine.

The quantity of cocaine along with the Nigerian man were then taken to the Marabella CID office. Inquiries are ongoing.