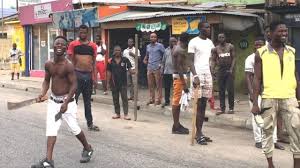 Residents of Coca Cola, Leventis, Ajibade, Ajegunle, Oke- Itunu and other neighbouring communities in Ibadan North Local Council Area of Oyo State are currently living in fear, as two people were feared killed by hoodlums in a reprisal attack in the area.

On Friday, some residents deserted their homes and shops following an attack that trailed the lynching of a suspected thief by angry mob on Thursday.

It was gathered that some hoodlums armed with dangerous weapons, swooped on the communities and attacked unsuspecting residents.

On their arrival, they were said to have shot sporadically, and destroyed several property. Two people were feared dead. A shop owner at Ajibade, who spoke on condition of anonymity, said: “Three hoodlums, on a commercial motorcycle stormed the area around 4.00p.m. and shot at two people. A man and a woman, simply identified as Toyin, were killed. Many people scampered for safety.” He said that the man died on the spot, while the woman died on Friday from gunshot wounds.

The Oyo State Police Public Relations Officer, Mr. Olugbenga Fadeyi, confirmed the incident, saying police had dispatched its men to the area to forestall further attacks, adding that one person died in the incident.

“Information I had indicated that hoodlums set ablaze a man suspected to be a thief on Thursday. Later, three men suspected to be cultists went on a reprisal attack, and shot at the man named Ojo Jacob. The victim was about 58 years old.

“To forestall further damage and loss of lives, anti-crime policemen and patrol vehicles have been stationed in the area. Our men are on surveillance in the communities. The police are also on the trail of the suspects for possible arrest,” he said.