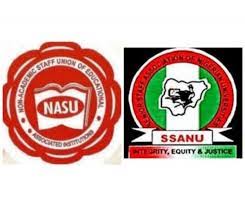 The Non-Academic Staff Union of Educational and Associated Institutions, NASU and Senior Staff Association of Nigerian Universities, SSANU, after a three-day nationwide protest in a bide to ensure implementation of issues contained in the Memorandum of Understanding, MoU signed and agreed with the unions by the Federal Government on 20th October, 2020, may soon embark on an indefinite nationwide strike if government refused to meet their demands.

In a circular issued by the the National Joint Action Committee, JAC of NASU and SSANU after a meeting on Thursday in Abuja, 14th January, 2021 to appraise the three day nationwide protest, the unions resolved that a meeting of leadership of the national JAC be convened on Thursday, 21st January, 2021 to discuss the way forward.

According to the circular, “The national JAC further observed the need for members of the unions (NASU and SSANU) to take ownership of subsequent decisions in respect of the way forward after the nationwide protests. To this end, branch chairmen of NASU and SSANU are hereby directed to convene joint congresses simultaneously on Tuesday, 19th January, 2021 to take a resolution on the possible commencement of an indefinite and total national strike in respect of non implementation of the issues contained in the memorandum of understanding (MOU) signed and agreed with the unions by the federal government on 20th October, 2020.

“The resolution of these congresses are to be forwarded to the national secretariats of the respective unions via email, while a meeting of the leadership of the national JAC shall be convened on Thursday, 21st January, 2021 to collate and take decision on the branch resolutions which shall be communicated to the branches subsequently”

Speaking to IDEALPOSTS in an interview after the JAC meeting, the national President of NASU, Dr. Hassan Makolo asserted that some persons in government treat their matters with impunity, adding that after signing the agreement in October last year, it is expected that the matters in contention should have been resolved by now.

Dr. Makolo, however stated that in as much as the struggle continued, the unions are not averse to meeting with the government at any stage, saying that their doors have been widely opened since they met with government 20th October last year to sign MoU.

“You know we are in democratic setting, we want everybody to be carried along, by the time we analysed the responses from these various branches, then we are going to brief you again on the next line of actions.

“Like I kept saying, NASU and SSANU have leadership that believed in due process. I can’t just stand now and tell that after the meeting from the branches, we are going on strike, no. Let the branches decide the way to go and we will meet to give approval, then we will tell you the way forward.

“From October last year to this moment, no meeting and no action was taken by government, so while they are doing their own thing, we are doing our own in our own way.

“And of course, we are not averse to meet with government, but I must tell you that we had a request from the Office of the Accountant General of the Federation to the extent that we were supposed to meet. We mobilised our leaders and we waited from morning till 7 pm, that meeting could not hold, nobody spoke a word to us and as I speak to you, nobody has apologised. We are human being and this is not palatable” he said.