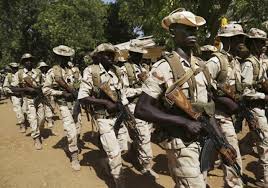 This develoment was confirmed by the Kaduna State government on Wednesday, just as bandits killed two persons in Igabi Local Government Area.

The Commissioner for Internal Security and Home Affairs, Mr. Samuel Aruwan in a statement explained that, “troops under the auspices of Operation Thunder Strike have continued patrols in Gwagwada general area of Chikun local government area which connects with the Kaduna-Abuja highway.”

According to the statement, “An operational feedback to the Kaduna State Government revealed that the troops conducted clearance patrols to Napayako and Dajin Wuya, during which several bandit camps were destroyed.

“The patrol followed an earlier attack by bandits on hunters in the forest, when two hunters were left with gunshot wounds.

“During the clearance operation, the troops mobilized to the location with some hunters who escaped the prior attack. While the camps were dislodged, one of the wounded hunters, Yohanna Yakubu, was found. The other hunter, Isuwa Tanko, was eventually confirmed dead.”

“Governor Nasir El-Rufai received the feedback with gratitude, praising the morale and resilience of the troops.