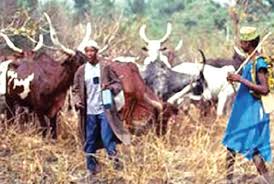 Suspected Fulani Herdsmen on Tuesday killed a farmer identified as Ridwan on his farm at Boole village in Ijabe area of Osun State, South West Nigeria.

It was gathered that his death was likely connected with an altercation he had with one of the herdsmen last year over the invasion of his farm by a herd of cattle that grazed there and destroyed what was left.

A resident of the community, Oluwole Segun, disclosed that Ridwan, popularly referred to as Rado of Eesa compound in Ijabe, Odo-Otin Local Government Area of Osun State, confronted the herdsmen who reared cattle to the area and destroyed his farm.

It was gathered that the issue led to an argument between the two parties.

“The alternation resulted in fisticuffs between the deceased and one of the herdsmen during which he hacked Ridwan to death.

“Some youths quickly rushed to the herdsmen settlement in the town, where the suspect and two others who were at the scene were caught and taken to the police station in the town.

“The police later visited the scene and evacuated the body to a hospital,” he said.

However, efforts to reach the Police Public Relations Officer, Yemisi Opalola, were futile as her number was not reachable. But a security source said the matter had been transferred to state police command headquarters for proper investigation.

Meanwhile, the elders in the community have prevailed upon the youths not to take law in their own hands so as to allow the security agents to do their jobs.