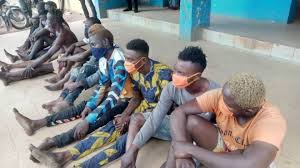 The Ogun State police commissioner, Edward Ajogun, said that both confraternities had been terrorising Ijebu-Ode and its environs, as they engage one another in a supremacy battle.

The Commissioner of Police said, Eiye members on Saturday tracked Jaiyeola to Ijebu-Mushin market and shot him. They also cut off his right hand.

The arrested suspects confessed to being members of Eiye confraternity and revealed that they have been in the supremacy battle in the last one month.

The battle according to the Police CP has lead to the maiming and death of members across the two groups, intensifying fear of crime and making life difficult for innocent residents.

The police during the parade also said that 16 persons were recently arrested for attempted murder, robbery, and cultism around the area.

The CP asserted that 6 firearms, 15 live cartridges, battles and aces were recovered from the suspected cultists.