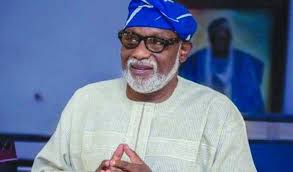 As the issue of insecurity continue to posh as a challenge in the country, the Ondo State Governor, Mr. Oluwarotimi Akeredolu, on monday called for multi-level policing system as the best way to secure the country.

The governor also called for provision of modern equipment for the Nigerian military to help in their fight against insurgents and other criminalities in the country.

The governor, noted that the issue of state police has become more necessary than ever.

He lauded the Nigerian military counter-terrorism efforts aimed at ridding the country and the state of criminal elements and criminalities.

Specifically, Akeredolu appreciated the support and commitment of the military in securing the state and confronting kidnappers and other elements who are troubling the peace of the state.

He lamented that issues of better ammunition and welfare of the security agencies must continue to be at the forefront, to better encourage and support the officers in their fight against criminalities.

Akeredolu implored the security agents not to rest on their laurel, stressing that despite their concerted efforts, criminality has not abated in the state and the country at large.

While reiterating the need to remember the fallen heroes and be joyful in God’s presence, the governor said despite the loses and death of public officers in the government, the devil must be shamed.

In his remark, the Brigade Commander of the 32 Artillery Bridage, Brigadier Gen. Zakari Abubakar, appreciated the commitment of Akeredolu to the 32 artillery brigade, soldiers, widows and dependents of the fallen heroes.

He said the command recognised and valued the continued supports and encouragement of the governor, urging him not to be tired of supporting them.