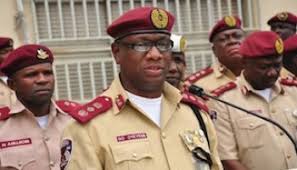 In compliance with the Federal Government directives on the harmonisation of citizens’ data; which the Federal Road Safety Corps, FRSC has since commenced with the introduction of compulsory provision of the National Identification Number, NIN by applicants of the National Driver’s License, NDL; the Corps Marshal, FRSC, Dr Boboye Oyeyemi has also made provision of NIN mandatory for all categories of vehicle registration, effective from second quarter of 2021.

In a press statement signed by Bisi Kazeem, the Corps Public Education Officer , FRSC, all applicants of vehicle registration are therefore expected to present their National Identification Number as a precondition for the registration of their vehicles.

The FRSC boss stated that there would be no waiver for anyone irrespective of their status in the society.

Explaining the importance of this to the national security architecture, the FRSC spokesperson further emphasised that the exercise has become imperative seeing the critical role a harmonised database on citizens’ information will have on national development in terms of resolving the challenges of identifying individuals to assist security agencies in data collation and speedy retrievals to address critical national security challenges.

Kazeem stated that the Corps Marshal also beckoned on members of the public who have not enrolled in the ongoing NIN registration at the National Identity Management Commission, NIMC to make haste and do so as the Corps will not register any vehicle whose owner is not captured in the NIMC database.

According to the Corps Marshal, “Beginning from the second quarter of this year, 2021, If you want to register your vehicle, it is going to be compulsory for you to provide your NIN. This is part of the security checks. So once you provide your NIN, it makes the matter easier and helps the government in national planning, critical decision making and also enhance adequate Intelligence gathering for security of lives and properties”.

You would recall that FRSC had commenced compliance on this directive since 21 December 2020, when the Corps Marshal mandated that all applicants for the National Driver’s Licence in Nigeria must present the National Identification Number, NIN from the National Identity Management Commission, NIMC before they can be captured for any class of the licences produced by the FRSC.