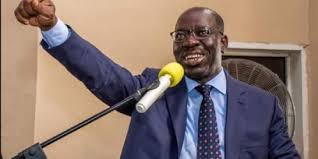 The Federal High Court Abuja has dismissed the alleged certificate forgery suit filed by the APC against Gov. Godwin Obaseki of Edo state.

Justice Ahmed Mohammed while delivering judgment in the alleged certificate forgery suit filed by the APC against the Governor, said that the APC failed to prove the forgery allegation beyond reasonable doubt.

The judgment was set for 12noon, but the judge began reading the verdict at about 1.20pm, by first reviewing the testimonies for the two parties.

The All Progressives Congress and a member had dragged Obaseki to court, accusing him of tendering a fake UI certificate to be eligible for the September governorship election.

Lawyers to all the parties adopted their final addresses on 7 January, making Justice Ahmed Mohammed slate verdict for today.

When the matter was called on Thursday, Obaseki’s counsel, Mr Ken Mozia (SAN) told the court that the business for the day was for parties to adopt their final written addresses.

Mozia said that he had received the plaintiffs’ 39-page final written address.

He said that on his part, he had filed his final address as well as a reply on points of law to the plaintiffs’ final written address.

“We adopt both written addresses, and premised on the arguments set out therein, we urge the court to make a firm determination that the plaintiffs woefully failed to prove their case,” he said.

Mozia urged the court to dismiss the case.

Similarly, Mr Razaq Isenelumhe, counsel to the PDP, adopted his written address as his final argument and urged the court to dismiss the case.

For his part, Mr M.A Bawa, counsel to INEC prayed the court to use the arguments filed by counsel to give judgment in the matter.

“For our part, we didn’t file any process in this suit and we have consistently remained neutral.

“In the circumstance, we will be urging the court to decide the matter one way or another based on the arguments before it,” he said.

Counsel to the APC, Mr Akin Olujimi (SAN) also adopted his written address as his final argument in the matter and urged the court to grant the claims sought by his client.

The APC and one of its chieftains, Mr Williams Edobor, dragged Obaseki to court for allegedly forging the University of Ibadan degree certificate, which he submitted to INEC to aid his qualification for the Sept. 19, 2020 governorship election in Edo.

The plaintiffs want the court to disqualify Obaseki and his party, the PDP, from the poll, in the event that Obaseki was found to have forged his university certificate, obtained in 1979.