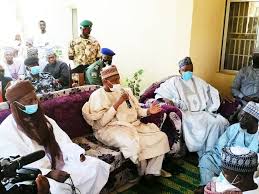 Bagudu, who attended the three- day Fidda’u prayer with many prominent personalities and hundreds of sympathisers, also expressed shock over the demise of the deceased.

He described the late Dallatun Gwandu as a cordial brother to him and prayed the Almighty Allah to grant him Aljannat Firdausi and give his family the formidable fortitude to bear the irreparable loss.

The late Salihu Attahiru was the Chairman, National Primary Health Care Development Agency, NPHCDA, and was also a former Commissioner in the State Ministries of Works and Housing, Water Resources, as well as Local Government and Chieftaincy Affairs.

The late Dallatun Gwandu died on Thursday, 7 January, 2021, at the Federal Medical Centre, Birnin Kebbi, after a brief Illness.

Bagudu was received by the former Governor of Kebbi State, Senator Muhammad Adamu Aliero and Associates.

In a similar development, Governor Abubakar Atiku Bagudu has also condoled with the family of late Alhaji Musa Umar Kalgo, who died on Wednesday, at the Federal Medical Center, Birnin Kebbi, following a protracted ilness .

Kalgo, who died at the aged 60 years is survived by two wives and thirteen children.