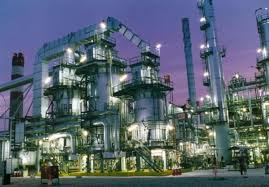 The Nigerian National Petroleum Corporation, NNPC is in talks to raise around $1 billion in a prepayment with trading firms to refurbish its largest refining complex at Port Harcourt, seven sources familiar with the discussions said.

If the financing is concluded, the long overdue rehabilitation of the refinery should reduce Nigeria’s hefty fuel import bill.

It would also mark Nigeria’s second oil-backed financing since the COVID-19 pandemic that has added to the difficulty of finding investors as fuel demand is sapped by lockdowns and renewable energy is gaining ground over fossil fuels.

The money would be repaid over seven years through deliveries of Nigerian crude and products from the refinery once the refurbishment is complete, the sources said. Cairo-based Afreximbank is leading the financing.

“Afreximbank is looking into a facility for the refurbishment of the Port Harcourt Refinery. However, the borrower is yet to be determined,” a spokesman for the bank said.

NNPC declined to comment. The sources said discussions were taking place with a range of foreign and Nigerian trading houses, including some who have previously worked with Nigeria, and who asked not to be named.

Apart from the problems of the pandemic and increased investor preference for carbon-free energy, defaults and fraud in commodity trading, mainly in Asia, have reduced the appetite of foreign banks for exposure to commodity trade finance.

A source at one foreign bank, also asking not to be named, said it was unlikely to participate in Nigeria’s latest effort because of lower credit availability and increased reluctance to take out exposure in a high risk country.

Nigeria has struggled with the poorly maintained units for decades. Successive NNPC chiefs and politicians have announced a series of unsuccessful plans to revamp, privatise or expand the refineries.

NNPC abandoned a similar attempt in 2019 to partner with oil traders, producers and engineering firms to fund refinery revamps after more than a year of talks, saying it would fund the projects itself.

The barely functional plants leave Nigeria completely dependent on imports, and subsidy schemes also cost the country billions of dollars. Nigeria says it eliminated subsidies, but the state’s NNPC is effectively the sole gasoline importer, using some 300,000 barrels per day of oil to swap for fuel.

In December, NNPC opened a bid round for a contract to rehabilitate the Port Harcourt complex. NNPC chief Mele Kyari also said last year that private companies would run the refineries once they were rehabilitated.

In July, global energy trader Vitol and Nigerian firm Matrix backed by banks agreed to lend NNPC $1.5 billion to support its upstream arm NPDC, although the discussions that led to the deal predated COVI