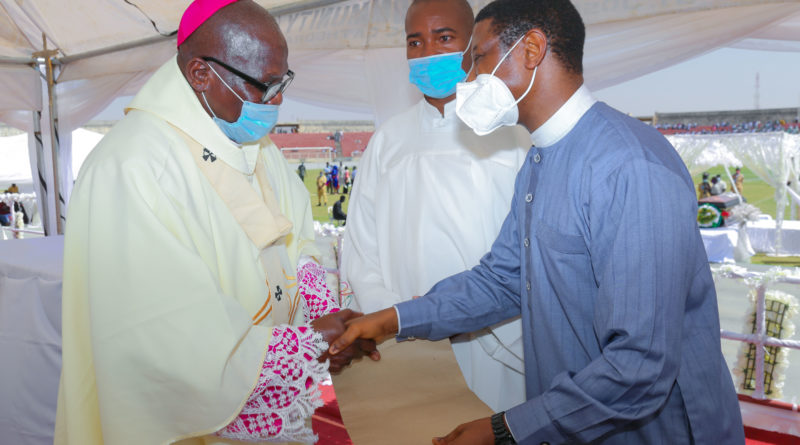 The Secretary to the Government of the Federation, SGF Boss Mustapha has extolled the sterling virtues of the late Catholic Archbishop Emeritus of Kaduna Archdiocese, Most Rev Peter Ja’tau.

Mustapha, while speaking at the Episcopal funeral Mass at Ahmadu Bello Stadium, Kaduna, on Wednesday 6th January, 2021, stated that the late Archbishop Emeritus did great apostolic work in Northern Nigeria which he would be greatly remembered.

The SGF, who spoke through the Chairman of the Christian Association of Nigeria, CAN 19 Northern states, Rev.Yakubu Pam commiserated with the entire Catholic church in Nigeria and Kaduna in particular for the passing on to glory of the first ordained indigenous Catholic Priest in Northern Nigeria.

In his letter of condolence which was later handed over to the Chief Mourner, the Catholic Archbishop of Kaduna, Most Rev Matthew Ndagoso by the SGF representative, he prayed that the soul of Most Rev Peter Ja’tau would rest in the bosom of the Lord.

Rev Pam in his capacity as the Chairman of the Northern CAN commended the good work of the late Archbishop in structural dvelopment in the Catholic Archdiocese of Kaduna as well as in Northern CAN.

He affirmed that the late Archbishop Ja’tau would be greatly missed because of the big vacuum his exit had created.

The Episcopal funeral Mass was attended by top echelon of the Catholic church in Nigeria, the political class, Catholic faithful and the family of the late Archbishop Emeritus.