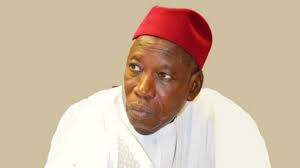 …Beneficiaries to be paid N20,000 monthly

Extended Special Public Works Programme has been launched in Kano as 1000 citizens would be temporarily employed and be paid #20,000 each for 3 consecutive months.

Kano State Governor, Dr.Abdullahi Umar Ganduje has said despite economic challenges, his administration has focused its attention and resources on human development in all spheres.

This is contained in a statement issued and signed by the Chief Press Secretary to the Deputy Governor of Kano State, Hassan Musa Fagge on 6th January, 2021.

The Governor, who was represented by his Deputy, Dr.Nasiru Yusuf Gawuna made the statement during the flag off of the Extended Special Public Works Programme at the Kano State level held at the Convocation Arena, Bayero University Kano.

He pointed out that Federal Government under President Muhammad Buhari deserves applaud for initiating and implementing various social investment and intervention programmes aimed at putting succour and alleviating the suffering of its citizens.

According to the Governor, “We are commending the Federal Government for initiating this extended special public works programme whereby 1,000 citizens from each of the 774 local government areas in the country would be temporarily employed and be paid #20,000 each monthly for 3 consecutive months.”

While reiterating his commitment towards uplifting the lives of the Kano people, Ganduje further explained that Kano state and the Federal Government share the same ideal and introduced numerous social intervention programmes as well as entered partnership with various multi national corporations on skills acquisition training programmes for the teeming youths.

He however urge the participants of the programme to be diligent and hardworking while discharging the responsibility bestowed on them.

“All tools and equipment required have been provided hence the Federal Government expects strong commitment from all stakeholders in ensuring efficient implementation” Magashi said.

The Minister also called the Federal Government to monitor the implementation of the programme to ascertain the efficient utilization of every resource and material committed to the programme.

In his remarks, the Acting Director General Of the National Directorate of Employment, Mallam Abubakar Nuhu Fikpo represented by Mallam Aliyu Abubakar Bichi, while the describing the programme as apt, extolled its significance to winning the war against unemployment in the country.