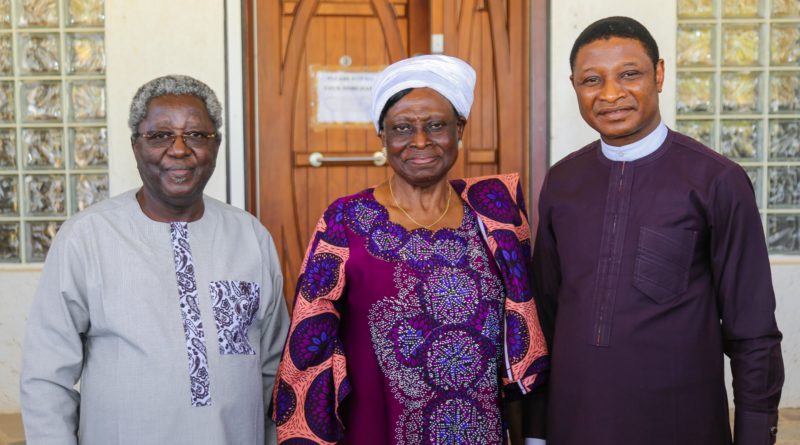 The NCPC boss described the former Governor of Plateau State as a national leader with credible track records of selfless service to Nigeria.

He stated that the Plateau people were deeply appreciative of his invaluable contributions to the growth and development of Nigeria and Plateau State.

The NCPC Chief Executive intimated the former Governor that he was in his residence to formally inform him of his appointment by President Muhammadu Buhari as the Executive Secretary of NCPC and to tap from his rich wealth of experience and wisdom.

He reiterated that he was galvanised to meet with the former Governor in order to appreciate him for playing critical role in uniting the country.

Rev. Pam stressed the fact that the former Governor and President Buhari were close and as such should join forces to move the country forward .

NCPC helmsman averred that the nation needs every hand to be on deck to drive the process of nation building.

In the words of the NCPC boss, “Nigeria really needs you because you are a national leader”.He thanked the Governor of Plateau State, RT. Hon Simon Lalong for supporting his appointment; he urged the people of Plateau State to rally round him to succeed..

Rev Pam prayed for the continued good health of the former Governor and wished him a happy new year.

In his remarks, Sen.David Jang congratulated the NCPC boss for his well deserved appointment. He reaffirmed that he had a wonderful time working closely with NCPC while serving as the Governor of Plateau State.

He affirmed that NCPC would continue to remain strategic in Christendom and it was a privilege that their own son was given the opportunity to occupy the office.

Sen.Jang described the NCPC boss as a distinguished Reverend. He commended his peace building initiatives across the country but advised that such peace building interventions should be holistic.

In the same vein, Rev. Pam and his entourage also visited the family of late Gbong Gwom Jos, Rtd. Deputy inspector General of Police, Victor Dung Pam where he met with the widow, Mrs Edith Pam and the eldest son of the late DIG, Captain Daniel Pam.

He described late Gbong Gwom Jos as a committed and disciplined Police Officer of high repute who contributed his quota to the development of the Nigeria Police Force, the nation and Plateau State .

Also, the NCPC boss and his team visited the family of late Michael Bot– Mang, the former Deputy Governor of Plateau State at Zawan, Jos South Local Government Area . He was received by the Widow, Mrs Lydia Bot–Mang.

He thanked God for giving her good health and for sustaining her all these years since her husband passed on.

In her appreciation, Mrs Bot–Mang thanked the NCPC boss for coming and congratulated him on his well deserved appointment.He further wished him a successful tenure in office.