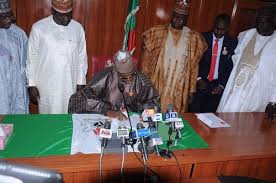 Speaking at the ceremony in Government House, Maiduguri, Zulum charged all government ministries, departments and agencies to comply strictly with the provisions of the budget.

The governor expressed appreciation to the state House of Assembly for the speedy passage of the budget.

Zulum said that his administration would continue to place a priority on security, education, healthcare, agriculture and the provision of portable water to the people.

Earlier, the Speaker of the State House of Assembly, Alhaji Abdulkarim Lawan said that the budget was raised from N208billion to N248billion to lay the foundation for industrial growth in the state.

Zulum had on Dec. 9, presented a budget of N208 billion to the House for approval. But the lawmakers raised the amount to N248 billion.