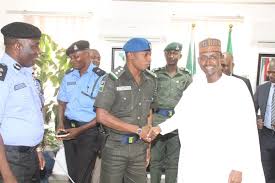 …decorates CSO, others with new ranks

The Minister of the Federal Capital Territory, Malam Muhammad Musa Bello, has called for public support for officers and men of the Nigeria Police Force and other security agencies in the country.

Malam Bello, who made the call while decorating his newly promoted Chief Security Officer, Chief Superintendent of Police Ahmed Rasheed, and three other officers in his security team with their new ranks, stressed the need to give the Nigeria Police and other security agencies the support and appreciation they duly deserve for their job of policing the country, particularly the FCT.

The Minister said that some were quick to judge the police based on the negative perceptions, and commended the FCT Police Command for keeping the nation’s capital safe.

He said that most of the time the police officers are not given due credit for their efforts. He said “in the FCT Command, I know the kind of work you have done, tirelessly, day and night. I am telling you, for each robbery incident, the FCT Command are able to prevent 10; for each kidnapping in the papers, they must have prevented up to 20; and every day, arrests are being made”.

Malam Bello also called on Nigerians to provide them with credible information to enable them perform their duties well.

The Minister said celebrating the newly decorated officers was a good way to end the year 2020 which has been fraught with a lot of challenges for the security agencies.

While commending the officers on their promotion, the Minister urged them to reciprocate the gesture by putting in more effort in the discharge of their duties.

Speaking earlier, the FCT Commissioner of Police, Mr Bala Ciroma congratulated the officers for their promotions and reminded them that the reward for hard work was even more work.