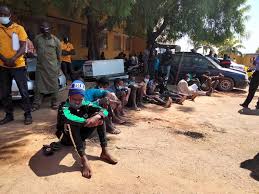 The Kaduna State Police Command has arrested some youths during the yuletide, who were allegedly behind the aborted maiden edition of a sex party in the state.

The Special Assistant to Governor El-Rufai on Media, Abdullah Yunus, said the police had waded into the matter and that arrests had been made.

“When we got to know of this development, the government was disturbed, so the governor, Mallam Nasir El-Rufai, informed the police,” he said.

The youths had advertised the event on social media platforms, revealing that the sex party was scheduled to hold on December 27, 2020 at an undisclosed venue in the state capital.

Going by the invitation, the participants, male and female, were expected to be naked as no clothes would be allowed at the venue of the event.

In addition to that, the party which was slated to start at 8 pm, would last till daybreak to allow participants interested in having sex during the party to do so satisfactory.

One of the promoters of the event, who spoke to journalists on Thursday said, “Kaduna Sex Party started as a joke between me and my friends; it was not meant to go public. It was not meant to cause any nuisance among the public in Kaduna State. It was just someone that felt that she was too brilliant that posted it on Twitter.

“I never posted the party invite on Twitter. Yes, I initiated it, yes, it started as a joke, but I keep saying it, it was not meant to disturb the peace and security of Kaduna. The whole thing was a joke. A friend made the flier that was posted on Twitter and put my number on it and we all laughed over it, but somebody sent it to someone and then to another person, until it got to Twitter.”

Earlier, the Kaduna State Urban Planning and Development Authority, KASUPDA demolished Asher Hotel in Barnawa area of the state over the planned event.

The agency, which is in charge of the planning and development of all urban areas in Kaduna, announced this in a tweet.

KASUPDA however alleged that the hotel was the proposed venue for the sex party, though a flyer attached to the tweet had no detail of the proposed location for the party.