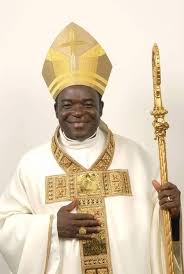 The National Directorate of Social Communications of the Catholic Secretariat of Nigeria in Abuja, has stoutly defended the state of the nation message delivered on Christmas Day by Most Rev. Matthew Hassan Kukah, Bishop Catholic Diocese of Sokoto.

In the statement titled, A call in Support of Truth’, the church said the attacks that the truthful message has attracted is ‘the stock in trade of evil people”.

“As expected, the agents of evil have gathered to attack the person of the Bishop and to discredit the simple obvious truth of the message…However, they often succeed when good people, Christians, choose to do nothing”.

Bishop Kukah poked the Buhari supporters when he delivered a damning verdict on the administration, saying the nation is almost rudderless under Buhari’s watch.

Kukah spoke about the worsening insecurity in the country, the parlous economic situation, Buhari’s nepotism and drive for northern hegemony.

And he said the ethnic colouration and bias of the government has not yielded good dividends for Northern Nigeria as it is the worst affected by insecurity.

He said that the prospects of a failed state stares Nigeria in the face, with “endless bloodletting, a collapsing economy, social anomie, domestic and community violence, kidnappings, armed robberies”

He then delivered a most critical judgment on the regime, saying that every honest Nigerian knows that “there is no way any non-Northern Muslim President could have done a fraction of what President Buhari has done by his nepotism and gotten away with it.

A day after Kukah delivered his speech, Minister of Information, Lai Mohammed launched the first counter-salvo, accusing Kukah of calling for a coup”, a comment that was not grounded in what Kukah actually said.

The APC similarly attacked Kukah, saying Nigeria is no where near what can be called a failed state.

On Monday, Professor Ishaq Akintola, who runs an NGO, styled Muslims Rights Concern poured some vitriol on Kukah, accusing him of painting Islam as a religion of violence and always standing up against a muslim leader.

“Kukah’s statement is reckless, inflammatory and unguarded. It is the most egregious, luciferous, serpentine and diabolical statement of the year 2020. Hassan Mathew Kukah is ululating from the wrong side of the pulpit.

“Kukah is in the habit of demonizing and demarketing any president who happens to be a Muslim. In particular, we are most disappointed that such a heavily prejudiced and explosive statement is coming from the secretary of Nigeria’s Peace Committee. His behaviour is consistently inconsistent with his status,” he said.

Kukah’s church has now risen in his support and also urging lovers of truth and justice to rise in defence of Bishop Kukah against the attack on his person and the attempt to discredit the simple obvious truth in his message.

In the statement the Church said the situation in Nigeria no longer allows anyone to sit on the fence or show indifference.

“We are quite aware of the 2020 Christmas Message by our revered Bishop Hassan Kukah and the enormous space it has enjoyed on social media and in public sphere.

“As expected, the agents of evil have gathered to attack the person of the Bishop and to discredit the simple obvious truth of the message. This is the stock in trade of evil people. However, they often succeed when good people, Christians, choose to do nothing.

“I am therefore calling our attention to this new development so that we can all rise in unison and stand for truth”.

The Church said that everyone must choose and stand up for what he or she believed in.

Quoting a popular verse by St. Augustine, the Church said that “evil is absence of good”, adding that people should add a voice in support of goodness, in order to forestall the reign of evil.

“The truth about our nation is also that there are only two parties now existing: the good and the evil, the oppressed and the oppressor, the suffering people and the benefiting government officers and their families.

“Please stop allowing anyone fool you with these cards: religion and tribe,” the church added.