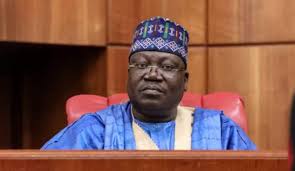 The All Progressives Congress, APC, Supporters Network, has called for the resignation of the Senate President, Ahmed Lawan for aligning himself with subversive elements to selfishly exploit the mandate of APC in the Senate.

Publicity Secretary of the group, Bala Abubakar, alleged that Lawan teamed up with those plotting to impeach President Muhammadu Buhari.

Abubakar said Lawan should resign within 14 days or be prepared to face the wrath of APC supporters across the country.

According to Abubakar: “It has come to the attention of members of the Co-APC-SuN, the suspected on-going secret plots by the President of the Senate of the Federal Republic of Nigeria, Sen. Ahmed Lawan and others reverting elements in the Senate to betray the party’s mandate entrusted in his custody.

“The Senate President is allegedly leading the underground consultations with other dissenters in the party to impeach President Muhammadu Buhari, for no reason other than the quest for political power. We are shocked or appalled at this revelation and the personalities pushing these underground plots against Mr. President.

“Co-APC-SuN was alerted of this devious plan by our patriotic members within and outside the confines of the National Assembly (NASS). These loyal party members were vehement on the surreptitious moves by Sen. Lawan in connivance with Sen. Kashim Shettima, who represents Borno Central Senatorial district in NASS to cause the impeachment of President Buhari.

“The duo are reportedly working with self-styled APC national leader, Asiwaju Bola Ahmed Tinubu. The grand design is to slam a surprise impeachment on President Buhari after alleging all manner of frivolous and imaginary breaches of the extant laws of the 1999 Constitution against him.

“Again, can Sen. Lawan also justify his innocence by swearing with the Holy Quran that his main motivation or bait for aligning political forces with Sen. Shettima against President Buhari is not because he has benefitted from the blood money which the latter looted from Borno State when he served as Governor of the state, where he supervised Local Governments resources for eight years without any accountability to the people?

“The Co-APC-SuN, therefore, calls on Sen. Ahmed Lawan to preserve the last vestige of dignity in him by resigning his position as the Senate President of Nigeria without any further delay.

“We hereby demand that Senator Lawan resigns as President of the Senate within 14 days from this date. Failure to do so shall attract the wrath of APC supporters nationwide to occupy the National Assembly until the needful is done.”