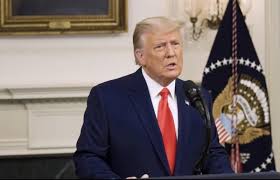 The bill incorporates $600 stimulus checks for most Americans.

Trump had teased about the likelihood of his backpedaling when he wrote o Twitter: “Good news on Covid Relief Bill. Information to follow!”

The over 5,600-page bill was passed by Congress on Monday night.

The bill authorizes direct checks of $600 for people earning up to $75,000 per year. The amount decreases for higher earners and people who make over $95,000 get nothing.

It also contains a $600 per child stimulus payment.

Trump had objected to the omnibus bill, saying it offers little to the struggling Americans.

He also wanted the bill to expunge extraneous items, such as foreign aid.

President Trump actually in a viral video described the bill ‘ a disaster’.