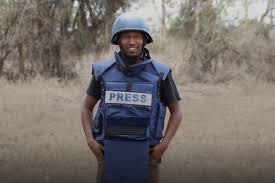 One of the Reuters cameraman, Kumerra Gemechu, was arrested in the Ethiopian capital, Addis Ababa on Thursday, and will be kept in custody for at least two weeks, his family said.

He has however not been charged as no reason was provided to the family for Thursday’s arrest, and the Police did not respond to Reuters’ requests for comment.

Kumerra, 40, has worked for Reuters as a freelance cameraman for a decade.

At a brief court hearing on Friday, where no lawyer was present, a judge ordered Kumerra’s detention for a further 14 days to give the Police time to investigate, the family said.

The arrest followed the beating of a Reuters’ photographer, Tiksa Negeri, by two Ethiopian federal police officers on Dec. 16.

“Kumerra is part of a Reuters’ team that reports from Ethiopia in a fair, independent and unbiased way.

Kumerra’s work demonstrates his professionalism and impartiality, and we are aware of no basis for his detention,’’ Editor-In-Chief, Stephen J. Adler, said in the statement.

“Journalists must be allowed to report the news in the public interest without fear of harassment or harm, wherever they are. We will not rest until Kumerra is freed,’’ Adler said.

10 armed federal police officers arrived at Kumerra’s home in Addis Ababa on Thursday evening and took him away in handcuffs in front of his wife and three children, his wife Hawi Desalegn said.

She added that his eldest daughter, who is 10, clung to him screaming as he was led away.

Police also confiscated Kumerra’s phone, a computer, flash drives and papers, according to the family.

Kumerra’s arrest follows government pressure on journalists for some international news outlets, which have been covering the conflict in Ethiopia’s northern Tigray region, where government forces have been battling the former ruling party, the Tigray People’s Liberation Front, TPLF.

Kumerra covered the Tigray conflict, but Reuters was unable to determine whether his arrest was connected to his work.

Government officials did not respond to questions from Reuters about whether his coverage was at issue.

Ethiopia’s media authority, the Ethiopian Broadcasting Authority, accused Reuters and other international media outlets in a November 23 statement on its Facebook page of “false” and “unbalanced” coverage of the fighting in Tigray.

“We stand by our reporting on the conflict in the Tigray region and will continue to report on Ethiopia with integrity, independence and freedom from bias, as we do all around the world,’’ Reuters said in a separate statement.

The New York-based Committee to Protect Journalists, CPJ said Kumerra’s detention was “the latest example of how press freedom is fast eroding under Prime Minister Abiy Ahmed after a short-lived hope of reform’’.

When CPJ carried out its annual census of jailed journalists on December 1, there were at least seven journalists in custody in Ethiopia for their work, CPJ said in a statement on Monday.

Five of those arrests took place after the Tigray fighting broke out on November 4, according to CPJ.

Thousands of people are believed to have been killed and around 950,000 displaced in the month-long conflict.

The government says it is now in control of the restive region, but it tightly controls access and some areas still do not have cell phone coverage.

When Abiy came to power in 2018, he speeded up democratic reforms and oversaw the release of tens of thousands of political prisoners.

However, local and international rights groups have expressed concern about the arrests of thousands of other people following outbreaks of deadly violence around the country.

The government has said those arrested were suspected of fomenting the bloodshed.

“One of the government’s primary roles and responsibilities is ensuring security and stability and that the rule of law prevails,’’ Billene Seyoum, a spokeswoman for the Prime Minister, told Reuters in August.

This was after more than 9,000 people were arrested following deadly clashes in the capital and surrounding Oromiya region.