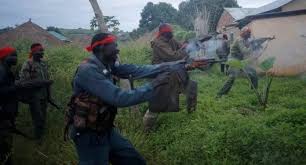 Armed bandits operated at Tssaka ward in Maitumbi, a suburb of Minna, the Niger state capital, on Sunday night kidnapped one person and injuring two others.

An eyewitness confined to IDEALPOSTS that the kidnapped victim is believed to be the head of the local vigilante in the community.

However, the identities of those injured are not yet known, but it was learned that one of them was shot in the thigh and the other in the leg.

The two persons are said to be receiving treatment at the IBB Specialist Hospital in Minna, the Niger state capital.

According to reports, the bandits came into the community through the Pyata hills in their numbers, using torchlight to find their way at about 8.30 pm, but were spotted by some youths who were returning home late.

The eyewitness said the youths raised the alarm which led to the local security outfit operatives in the area being mobilised to confront the bandits.

According to the report, the bandits on sighting men of the vigilante shot at them resulting in the two men being injured and one person kidnapped.

It was gathered that the cell phone of the man kidnapped was used to contact his relation during which they (bandits) demanded for “huge” ramson.

The incident created pandemonium in the community resulting in the people taking refuge at the Maitumbi Primary school.

The police could not be reached for confirmation of the story, but the Chairman of the local government, Alhaji Abubakar Sulaiman Gomma confirmed the incident.

Gomma said the situation had been brought under control and asked the people to go about their normal business.