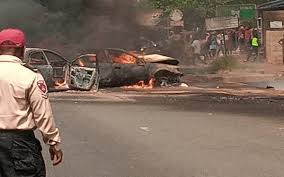 The accident which occurred opposite a petrol station involved a Toyota Camry and Toyota Corolla cars with the nine victims on board.

An eye witness said the Toyota Corolla was trailing behind the Camry which was carrying diesel when the driver suddenly lost control and rammed into it.

He said both vehicles immediately went up in flames, while the occupants escaped unhurt.

He said no injury was recorded in the incident.

Read Also: Anambra retirees threaten hunger strike over unpaid gratuities
He said, “An unidentified motorcycle rider was knocked down by an unidentified driver of Toyota Camry car with registration number YEN 697 PY, who was speeding and lost control.

“An unidentified Toyota Corolla driver without registration number tailgating the Camry car rammed into it and it led to fire out break because the Toyota Camry car was carrying diesel.

“FRSC rescue team, Nigeria Police and men of men of NSCDC all on ground managing the situation ensuring free flow of traffic. The fire was put off with a local initiative by the team.

“A water tanker was invited to put off the fire before the arrival of men of the Fire service.”

Kumapayi warned motorists to avoid speeding and tailgating, insisting they should use recommended speed limit especially in build up areas or common sense speed limit to avoid crash.