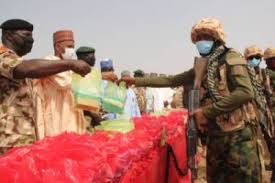 Yobe state Governor, Mai Mala Buni, has lauded the troops of Operation Lafiya Dole for their efforts in restoring peace and security to the state and the North East in general.

Buni gave the commendation at the Christmas Luncheon organised for the troops by the Chief of Army Staff, Lt.-Gen. Tukur Buratai, at Nigerian Army Special Forces School Bunu Yadi, on Friday.

The governor, who was represented by his deputy, Alhaji Idi Gubana, said the security situation in the state had greatly improved in recent times owing to the commitment of the military and other security agencies.

He said the troops had continued to make enormous sacrifices in ensuring that our state was safe and secure, adding that his Government was determined to support the military.

Buni said the effort to put an end to indiscriminate termination of lives of innocent citizens and wanton destruction of properties, had achieved the desired results.

According to him, it is worthy of note the efforts troops in Operation Lafiya Dole had provided an enabling environment and support on which the government activities are thriving.

He urged the troops not to relent in their effort until the state and the entire North East was secured.

“Let me restate the commitment of this administration to support troops of Operation Lafiya Dole with logistics within the available resources of the state to tackle the Boko Haram insurgency.

“We shall continue to support all other security agencies and to further strengthen the Civilian JTF and hunters to better support the efforts of the troops.

“I urge you to speedily put a total end to the menace,” he said.

Speaking, the Chief of Army Staff said the luncheon was to thank God for giving them good health to be part of the operation to restore peace and security to the North East and the entire country during the year.

He said the occasion was also to appreciate the doggedness and resilience of all Nigerian army officers and soldiers confronting various security challenges bedevilling the country.

Buratai commended the professional conduct and determination of army troops to ensure that the terrorists and the criminals were dealt with once and for all.

According to him, the successes so far recorded by troops deployed in ongoing operations nationwide and other internal security operations are commendable.

“So far, we have demonstrated professionalism, courage and determination in this endeavour which has provided the enabling environment for socio-economic and political activities to thrive.

“While I commend your effort, I urge you not to rest on your oars because the existing and even the emerging security threats are potent and we must continue to be ahead of them.

“We must redouble our efforts to completely eliminate all acts of insurgency, kidnapping, banditry, separatism and all other forms of security threats from every inch of our beloved country.

“I, therefore, convey to you the greetings and felicitations of Mr President and Commander-in-Chief of the Armed Forces, President Muhammadu Buhari on this auspicious occasion.

“Mr President is proud of you all and I want to assure you that with the support of the President, the National assembly and of course the greater people of Nigeria, we shall continue to do all that is necessary to provide the enabling environment for the effective and successful conduct of our operation,” he said.

Buratai reassured the troops that the military high command would continue to revaluate the welfare packages of the Nigerian Army to ensure they meet the best standards and international practices.

He urged the troops to also pray for the repose of the gallant departed colleagues who paid the supreme price in the course of their duties.

“Our hearts will always be with their families as we pray to Almighty God to grant them eternal rest.

“On our part and in line with our commitment to troops’ welfare, we shall continue to promptly meet our obligations to these families and ensure that void left by the departure of their beloved ones are ameliorated.

“It is in this regard that we launched the housing programme for the next-of-kin of our fallen heroes,” he said.