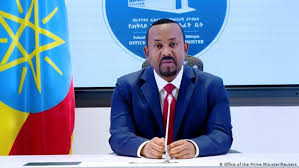 The Ethiopia National Electoral Board has said that the country will hold a parliamentary election on Friday June 5, 2021.

Abiy’s Prosperity Party, a pan-Ethiopian movement, he founded a year ago, is facing challenges from increasingly strident ethnically-based parties seeking more power for their regions.

Africa’s second most populous nation has a federal system and 10 regional governments, many of whom have border disputes or face low-level unrest.

In the Northern Tigray region, thousands of people are believed to have died and 950,000 have fled their homes since fighting between regional forces and the Federal Government erupted on November 4, 2020.

Tigray held its own elections in September 2020 in defiance of the federal government, which declared the polls illegal.

The election board said its calendar for 2021 does not include an election in Tigray.

It said it would announce a date for elections there once the interim government established during the conflict is able to support the opening of election offices there.

For nearly three decades until Abiy’s appointment, Ethiopia was ruled by a coalition of four ethnically-based movements dominated by the party from Tigray.

That administration ruled in an increasingly autocratic fashion until Abiy took power in 2018 following years of bloody anti-government street protests.

The initial months after Abiy’s appointment saw a rush of political and economic reforms, including the release of tens of thousands of political prisoners.

In 2019 Abiy merged three of the old parties to form the Prosperity Party only the Tigray People’s Liberation Front (TPLF) refused to join.

But loosening the government’s iron grip was also followed by outbreaks of violence as regional power brokers jostled for resources and power.

On Thursday, Abiy said he was sending forces to the western Benishangul-Gumuz region, which borders Sudan, the day after unidentified attackers, torched homes and killed more than 100 people in a village there.

There is also a long-running insurgency in Oromiya region, Ethiopia’s most populous region.

The Oromo Liberation Front, an opposition party from the Oromiya region which was once declared a terrorist movement before it was unbanned by Abiy, said on Dec. 12 that the government was using the prospect of an election to divert attention away from the myriad security problems.

“Though the ruling party wants to conceal the existing problems and divert attention towards the national election, it is obvious that the country has descended into complex security crises and political catastrophes,’’ it said

“We recommend that repairing the fractured administrative regions and restoring peace and security must be undertaken before the election takes place.”

Many Oromo politicians are in jail, such as Jawar Mohammed, a prominent media mogul and member of the Oromo Federalist Congress party.

He and other party leaders were in September charged with terrorism offences following the killing of the popular Oromo musician Haacaaluu Hundeessaa.

The death of Haacaaluu sparked protests that killed at least 178 people in Oromiya and the capital.

Ethiopia’s parliamentary vote was postponed from August 2020 due to the COVID-19 pandemic.

The chairman of the winning party becomes prime minister.