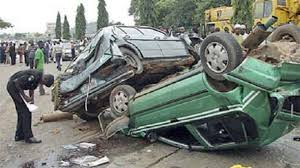 He said that the accident, which occurred at about 5am, involved two vehicles in a collision.

Aghure said that the two vehicles; a luxury bus and a Toyota Hiace were both conveying a total of 55 passengers to different destinations.

He said that 15 passengers died on the spot while two others died in hospital, bringing the total number of casualties to 17.

“The Toyota Hiace was going to Auchi , Edo State and the luxury bus was coming from Okene axis.

” he luxury bus overtook a car and in the process lost control.

”Of course it was night, so it came and hit the smaller Toyota bus, pushing it into the bush.

”The vehicle somersaulted, and 15 people died on the spot and two later died in the hospital,” Aghure explained.

The sector commander said that 25 other passengers who sustained varying degrees of injuries were taken to a private hospital for treatment while the corpses of the 17 were deposited at the morgue of the Federal Medical Centre, Lokoja.

He said that further investigation into the accident had commenced .

“It is very important for motorists to obey the speed limit which is 90kph for commercial vehicles and 100kph for private vehicles,” he stated.

In order to reduce stress and road accident during the festive period, Agure said that 522 personnel had been deployed to different routes in the state .

He said that additional personnel were also being expected from Ekiti and Kwara states to complement those on ground and advised motorists to always obey traffic rules.