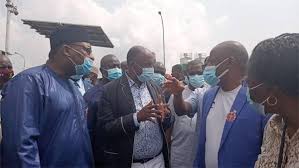 Minister of Transportation, Hon. Rotimi Chibuike Amaechi has called for the cooperation of the APM Terminals and the contractor handling the Ebute Meta-Apapa Seaports railway, China Civil Engineering Construction Corporation (CCECC) so as to meet the January 2021 deadline.

Amaechi made the call at the weekend while while embarking on the monthly inspection of Lagos-Ibadan rail project.

“We have already told the President, that we are commissioning in January. We are working towards that time and we must achieve that time” Amaechi said.

He said, “The moment we begin movement of cargo from Lagos to Ibadan, then the Lagos gridlock will reduce drastically and that’s my objective in January”.

Earlier, the Country Manager of APM Terminal, Klaus Laursen, showed the Minister the monitoring station which gives real time information on what is happening in all sections of the terminal, saying ” the essence is to have it here to control and monitor cargoes coming in and going out of the terminal.”

According to him, they decided to introduce one in Nigeria as it is the trend in Shanghai and other global towns where similar operations take place.

While acknowledging the fact that the terminal is not where it is supposed to be, Laursen, said they were putting the right facilities in place to encourage productivity.

The Country Manager of APM Terminals, Klaus Laursen, had earlier shown the Minister the monitoring station that gives real time information on what is happening in all sections of the terminals, stating that the purpose is to control and monitor cargoes going and coming out of the terminals.