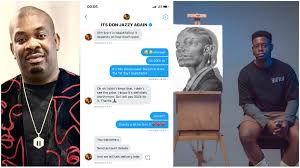 A Popular Nigerian music producer, Don Jazzy, has bought the pencil drawing of a young fine artist, Fredrick Omoniyi, for a good sum .

The amount Don Jazzy paid for the piece was N100,000 more than what he offered to sell it to him.

Fredrick shared his newfound blessing with tweeps who thanked the producer for encouraging the young artist.

A young Nigerian artist, Fredrick Omoniyi, now has every reason to celebrate after Music Boss Don Jazzy bought his artwork for N300,000.

It should be noted that the man had earlier hoped to sell his pencil drawing on his birthday many weeks ago.

In a Twitter post, he lamented not being able to sell the piece as he tagged Don Jazzy to it, asking if he would buy it.

Hours after, the music producer slid into his DM and asked how much. When Fredrick said N200,000, Don Jazzy added another N100,000 and paid.

In total disbelief at how his life just changed, the man shared a screenshot of their conversation on his timeline as he thanked Don Jazzy for the help.

Many Nigerians commended the music boss for his generosity, saying that he has never failed in lifting people up.