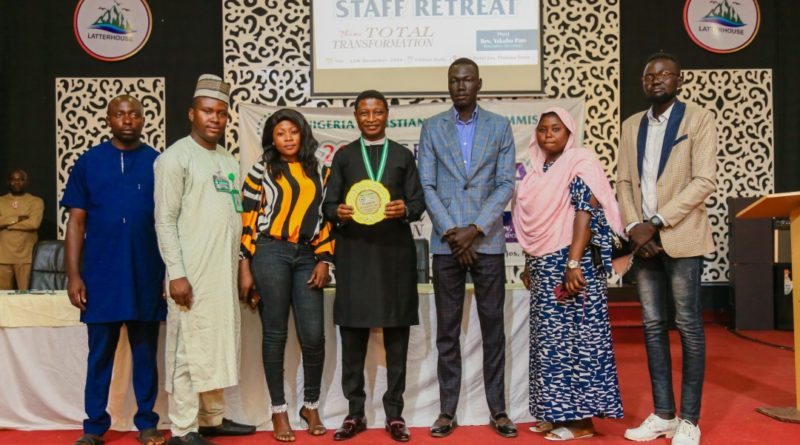 The Executive Secretary of the Nigeria Christian Pilgrim Commission, NCPC, Rev Yakubu Pam, has been conferred with the Patton of West African Youth Parliament award.

The award was presented to him by the Speaker of the ECOWAS Parliament, Comrade Olasunkanmi Kolawole during the General Staff Retreat for NCPC staff in Jos recently.

The NCPC boss thanked the leadership of the West African Youth Parliament for the honour bestowed on him.

He stressed the need for leaders to be closed to the young ones in order to properly guide them aright.

According to Rev.Pam, ” My joy today is not about the award, but a group outside this country recognising what we are doing”

Rev. Pam dedicated the award to the management and staff of NCPC.

Earlier, the Speaker of the ECOWAS Youth Parliament,Comrade Olasunkanmi Kolawole extolled the sterling leadership qualities of the NCPC boss, especially his sacrificial leadership and rich pedigree in peace building

He averred that the NCPC boss epitomises leadership by example which had galvanised them to adopt him as a role model, a pacesetter and a pathfinder of the leader of the youth.

He further explained that because of his positive contribution to humanity and peace building , the ECOWAS Youth Parliament also decided to pass a vote of confidence on the leadership of the NCPC boss.