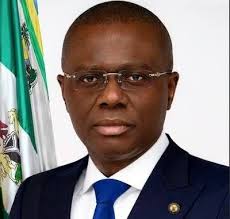 The Lagos State Governor, Mr Babajide Sanwo-Olu, on Friday said that the state would enhance its healthcare delivery system through the introduction of digitalised system and new innovations.

Sanwo-Olu said this at a Hybrid Y2020 Health Forum organized by the Lagos State Health Service Commisson with the theme: Reform of Bureaucratic Processes: Creativity and Innovation in the Health Care System.

The governor, who was represented by his deputy, Dr Obafemi Hamzat, said that science and technology was fast evolving, bringing about new changes and innovations to the way of life across all facets.

“There are new ways of treating and the interacting with patients are being discovered daily and patients files and information are now being digitalised.

“In order not to be left behind, it has become imperative to introduce new creative ideas, initiatives and innovations that will better enhance the healthcare system in the country.

“Also, this will make the system more efficient and service delivery to patients faster and even better,” he said.

The governor said that to make the system more efficient, the administration was aggressively pushing policies such as the Lagos Health Insurance Scheme, EkoTelemed and a couple of others.

Sanwo-Olu noted that training of medical personnel within and outside the country was being priotised in order to expose health workers to new knowledge, processes and procedures that could be replicated in hospitals and healthcare centres.

“Health is synonymous to wealth and a point for urgent attention for any nation that wishes to tow the path of development, as a healthy population is more productive and fosters economic development,” he said.

He, however, praised medical personnel for their sacrifice and doggedness in combating the COVID-19 pandemic.

Prof. Akin Abayomi, Lagos State Commissioner for Health, commended the commission for coming up with the theme of the programme which centres on bureaucratic reforms.

Abayomi, who is the Chief host of the forum, said that there was the need to cut down on excessive bureaucratic processes to make thing easier in the health sector.

“I must really commend the Commission for having the courage to deal with such a difficult subject which is the issue of bureaucracy.

“Bureaucracy is described as a system that refers to an organisation that is complex and that suit the Ministry of Health.

“During my post-graduate years in the UK, the British government through a concerted effort eliminate excessive bureaucratic process by cutting down manpower and introduced digital path ways that made things easier.

“We are already trying to put in place a digital platform for the medical family in Lagos,” he said.

The Commissioner added that budget efficiency should be critically monitored to know the impact on the health system.

“There are also other issues like manpower deficency, infrastructure and budget efficiency which is a major thing that we should always put into consideration.

“It is not the amount of budget drown down for a year that matter but the impact of the budget for what it is meant for.

“We have reviewed our health budget to look into areas where we are not performing and it is very important to have a system that monitor the budget on a monthly basis for performance,” he said.

Dr Ademuyiwa Eniayewun, the Permanent Secretary of the Commission, said the forum was organised to promote discourse advocacy and mutual understanding among the various sectors within and outside the health sector.

According to Eniayewun, the public health sector in the country provide over 70 per cent of service delivery.

“The health sector is unique all over the world and has the highest concentration of different profession cadres working as a team to deliver the desired outcome.

“Our ability to respond to the dynamic challenges peculiar to the health sector depends on how well we engage critical stakeholders and actors within the public and even private sector.

“The ongoing pandemic response had shown that it is possible to fashion out the right model of care with broad engagement of stakeholders tapping into abundant resources and skills,” he said.

He commended Gov. Sanwo-Olu for his commitment to further upscale health care delivery as well as the welfare of health personnel across the state.