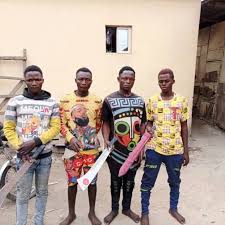 The Lagos State Police Command has traced some suspected armed robbers to Kachai Local Government Area of Kaduna State and arrested them with their weapons of operations.

The Police operatives, which exhibited its forensic skills in combating crimes, followed the reported case by the victime at Bariga station in Lagos, traced the armed robbers to Kaduna where they were finally arrested.

A statement issued by Police Public Relations Officer, PPRO, Muyiwa Adejobi, said further to the instruction of the Commissioner of Police Lagos State, CP Hakeem Odumosu, the Divisional Police Officer, Bariga, adopted intelligence and forensic strategies to trace the suspects to the said village in Kaduna and apprehended the four of them.

The suspects included Junior Michael, 22; Pius Eko, 18; Samson Yunana, 22 and Daniel Yaki, 19, who was once a security guard to the victim.

“They were arrested on 1 December, 2020, with the dangerous weapons used for the said operations. They have confessed to the crime,” the statement said.

However, Odumosu, while commending the police operatives for their professionalism and commitment to getting the suspects, ordered the State Criminal Investigation Department, CID to take over the case for discreet investigation and prosecution.