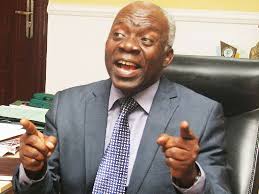 Human rights lawyer, Femi Falana, has advised President Muhammadu Buhari to honour invitation extended to him by the House of Representatives.

Falana gave the advice in a reaction to the comment by Abubakar Malami, the Justice Minister and Attorney General of the Federation.

Malami said on Wednesday that the National Assembly has no right to summon Buhari, to speak on security issues.

“National Assembly has no constitutional power to envisage or contemplate a situation where the president would be summoned by the national assembly on the operational use of the armed forces,” he said.

Buhari is scheduled to address the lawmakers on Thursday. But when the plenary session opened, there was no indication he would address them.

Debunking Malami’s claim, Falana said the National Assembly has the power to summon the President.

“On his own part, the honourable Attorney-General of the federation has questioned the constitutional power of the National Assembly to invite the President on the grounds that as the Commander-in-Chief of the armed forces, he cannot be compelled to disclose operational details of the defence of the country.

“With respect, the President is under a moral and legal obligation to honour the invitation.

“Having accepted the invitation, the president should not allow himself to be embarrassed by turning round to turn down the invitation”, Falana said in a press statement.