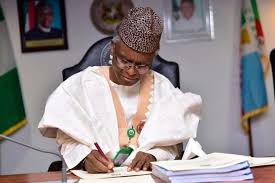 The Kaduna state Governor, Nasir el-Rufai has signed the 2021 state budget into law.

He thanked the House of Assembly for consistently passing the next year’s budget way ahead of the end of the preceding financial year.

Governor El-Rufai explained that signing the budget into law is a welcome development, adding that it would positively impact on all spheres of the society as it is implemented from January 1, 2020.

The Speaker of the Kaduna State House of Assembly, Yusuf Zailani, in his speech, described the signing of the 2021 budget of the state by Governor Nasir El-Rufai as a positive look towards progress in the coming year

He assured that Governor El-Rufai would carry all in the state along in implementing the urban renewal that has been ongoing.

He commended the governor for the decisive action of passing the budget bill into law.

Zailani also appreciated the Governor for acknowledging the efforts put in by the state assembly in passage of the budget.