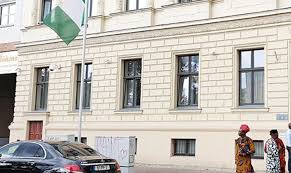 The Nigerian Embassy in Germany has on Tuesday, sacked its senior security staff, Mr Martin Oni, after findings confirmed that he was guilty of the charges of the sexual scandal against him.

Oni, was caught on camera in a viral-video a month ago demanding for s*x before he renewed a woman’s travel passport.

He was seen half-naked arguing with an unidentified individual who accused him of demanding s*x from females who seek to renew their travel passports.

The Embassy has suspended Oni, after the report emerged and the Nigerian Ambassador to Germany, Yusuf Tuggar­, ordered an investigation into the incident.

The embassy in a statement on Tuesday, disclosed that investigations revealed weeks after, that Oni was truly guilty of the accusation.

The statement read: “The Investigation Committee interviewed Mr Oni and other witnesses as part of a thorough examination of these very serious charges.

“It concluded that Mr Oni was culpable and in violation of all the relevant codes.

“As a result, Mr. Martins Adedeji Oni’s contract with the Embassy as a Local Staff has been terminated.”

The Embassy however, thanked the general public for exposing Oni, adding that it still maintains it’s zero-tolerance policy toward abuse of offices and sexual misconduct.