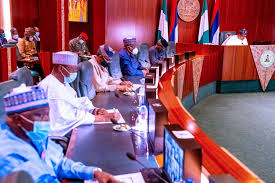 The National Executive Council, NEC of the Peoples Democratic Party, APC, has dissolved all its executive committees across the states and zones in the country.

This was disclosed by Governor Nasir El-Rufai of Kaduna who briefed journalists after the NEC meeting.

“NEC approved the immediate dissolution of the party organs at the polling units, wards, local government, states and zonal levels as well as the non National Working Committee component of the National Executive Committee as well as their immediate reconstitution and composition of the dissolved EXCOs to serve in their respective offices in a caretaker committee capacity but excluding the non-NWC members of NEC,” he said.

“NEC approved the expulsion of Ntufam Hilliard Eta from the party for flaunting the directives of NEC to discontinue all litigation against the party and its members,” Mr El-Rufai said.

Mr Eta, an ally of the former national chairperson, Adams Oshiomhole, was expelled for his refusal to withdraw a lawsuit filed against the party, an act the party tagged as a disregard for President Muhammadu Buhari’s directive issued during the June emergency meeting.

In his remarks at the virtual NEC meeting on Tuesday afternoon, Mr Buhari expressed his satisfaction with the performance of the 13-member caretaker committee and projected a better performance in the coming days.

He hinged his assessment of the committee’s performance on the defection of members of opposition parties to the ruling APC and the “remarkably new atmosphere of hope” eminent in the party.

“I am convinced that in the last five months, since the appointment of the caretaker committee, the initiatives taken have brought a remarkably new atmosphere of hope in the party.

“Healthy debates are now taking place and the potential for organs of the party to affirm majority positions as the decision of the party is now possible.

“What is required now is for all of us as leaders of the party to maintain discipline and ensure that this new momentum is protected, sustained and the decisions of party organs are respected by every member,” he told party leaders in attendance.

Also in the report presented to the party’s NEC, Mr Buni said his team has successfully doused the tense atmosphere in the party through his reconciliatory moves, acknowledging that loose ends are still visible in some quarters.

Unlike Ekiti, Ondo and Edo states chapters where pronounced crises have been seemingly doused, the Zamfara State chapter of the party is still undergoing an internal crisis, a reality the Mr Buni-led committee has continued to refuse to accept.