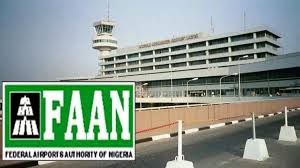 The Federal Airports Authority of Nigeria, FAAN on Tuesday disclosed that it remitted N2 billion into the Consolidated Revenue Fund, CRF account between January and September 2020

The managing director of FAAN, Captain Rabiu Yadudu told the visiting members of the House of Representatives Committee on Aviation that the agency currently does not have any operating surplus.

Yadudu, who also revealed the revenues and expenses for the year 2020, also appealed to the committee to expedite action on legislation that will help the agency fastrack its operations across the country’s airports.

He said “FAAN does not have an operating surplus. However, between January and September 2020, the Authority has remitted about N2 billion to the Consolidated Revenue Fund, CRF account.

The Authority is also mindful of the National Assembly committees on Aviation in ensuring that FAAN is exempted from payment of operating surplus to the Federal government. The exception of FAAN will guarantee that the revenue generated by the airports is transparently reinvested wholly in operating and developing airport facilities in compliance with International Civil Aviation Organisation, ICAO standards and recommended practices on airport generated revenue,” he said.

“The Authority is shifting focus from Aeronautical sources of revenue to non-aeronautical; FAAN is presently operating at only about 30 percent of its pre-COVID capacity. The Authority has set up a revenue task force to aggressively drive revenue, follow up on outstanding debts owed and explore all possible investment opportunities,” he said.

He called on the lawmakers to give accelerated attention to the agency’s budget saying “The 2021 IGR budget was submitted to the committee for consideration, we believe that early consideration and passage will enable achieve better in 2021.”

Yadudu explained that “Nigeria is expected to be a hub in West/Central Africa sub-region, adding that this can only be met through more funding for the provision of modern infrastructure and technology, this we believe can only be achieved with your support.

“The aviation agencies will urgently need intervention funds from the Federal government to address infrastructural gaps and position the industry for better service delivery and contribution to the national economy, on this note; we seek your assistance in this area and the other aforementioned areas.”

The FAAN MD noted that its staff salaries are paid in full to staff, dispelling rumours that it has hitherto been paying half salaries to FAAN workers.

While acknowledging challenges in the prompt payments, he affirmed that “nobody receives a half salary in FAAN; we always say half salary is no salary.”