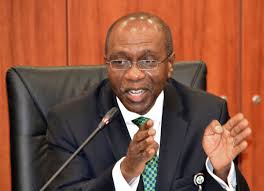 The Central Bank of Nigeria,CBN has advised Nigerians to moderate their insatiable tastes for consumption of foriegn goods to stabilize the nation’s economy.

CBN Governor, Mr Godwin Emefiele gave the advice during a one-day interactive engagement session with stakeholders on the five year Policy Thrust of the CBN held in Kaduna.

The stakeholders includes the organized labour union, commercial banks executives and among others.

Emefiele in an interview with journalists shortly after the interactive session said the most lasting and sustainable measure to grow the nation’s economy fast is by produce what we eat in the country.

He recalled that in the 70s, the country invested in agriculture, production some basic items to cater its needs and export of locally produced goods to strengthen its currency and the economy.

Represented by Assistant Director Cooperate Communications of the CBN, Sam Okogbue, the apex bank governor advised Nigerians “to return to production of what they consume. Nigerians should go back to moderation of their taste and consumption of foriegn food.

“If we do so, it will help the government to stabilize the economy,” he emphasized.

While noting that, the nation’s economy is affected by COVID-19 Pandemic, the #ENDSARS saga, Governor Emefiele pointed out that there is need to accelerate growth of double digit by reducing inflation.

This according to him will “lower rate of unemployment” and put the country back on track.

In his welcome address, the branch controller of CBN in Kaduna, Umar Biu said that the interactive session will create opportunity for the department and the relevant stakeholders to carefully deiblrate on the subject of discourse to chart a way forward for socioeconomic development of the nation.