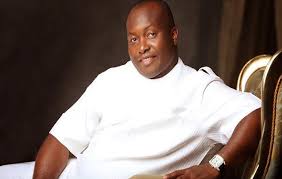 Senator Ifeanyi Ubah has stated that come 2023, the Young Progressive Party, YPP will take over the leadership of Nigeria.

The senator representing Anambra south senatorial district and the national leader of YPP stated this at the party’s special national convention held during the weekend in Abuja.

Sen. Ubah said that, a journey of million miles start with a step and that step have been reengineered as they are matching forward to take their rightful place.

“By the grace of God, in just two years time, we will be number one in Nigeria. I have a reason for being in YPP”

On his part, the National Chairman of YPP, Bishop Amakiri in his speech titled” ballot revolution, YPP generation now”, called on Nigerian youth to join the Young Progressives Party soldiers of dissatisfied Nigerians so that they can forge a common front in pursuit of a new Nigeria their dream.

Amakiri said, “The nation currently needs urgent intervention as all socio-economic and political indicators are not favorable. The economy has been on a free fall with increasing poverty owing to the several obnoxious economic policies of government such a indiscriminate taxation, incessant increment in the prices of PMS and electricity tariff, high cost of governance and closure of our land borders without the adequate capacity for sustainable production”

He noted that YPP has been at the forefront of advocacy in addressing these several Challenges as it borders not only on the economy but also on security and polity.

“Kindly be reminded of our peaceful protest walk in February this year to the National Assembly to demand urgent electoral reform, restructuring of the nation and rejig of our security architecture so as to address our unending security challenges.

In September 15th, 2020, not pleased with the government yet again for their insensitive simultaneous increment in the prices of PMS and electricity tariff aftes more than 3 months lockdown without adequate provisions by government our party embarked on a protest we tagged “Advocacy Walk for Good Governance” to demang reversal of anti-people policies, reduction in the cost of governance, and complete accountability. Even though we were teargassed by men from the Nigerian police force who were instructed to disperse us, we were not deterred but stood our ground until our voices were heard,” he said.

Adding that, “Exactly two weeks after our struggle that the #EndSARS protests started any swept through the nation to demand an end to police brutality and oppression. event, that later unfolded revealed that the #EndSARS struggle was just a metaphor used by Nigerian youth to express anger over the State of the nation where poverty, insecurity, and youth unemployment have risen to an unprecedented level”

“Our position was unambiguous as a political party, as we stood in solidarity with the beaceful #EndSARS protesters and vehemently condemned the brute force used against them, especially those who protested at the Lekki toll gate. While we await for the judicial panel of inquiry set up to look into the alleged killings by soldiers, we admonish those Saddled with this responsibility for unraveling the truth to ensure that justice is done in Order for healing to take place”

“We call on Nigerian youth to join the Young Progressives Party soldiers of dissatisfied Nigerians so that we can forge a common front in pursuit of a new Nigeria of our dream, The only way we can achieve this herculean task is through a revolution that will only Come through the ballot, hence our theme for this special convention tagged “Ballot RevolutionYPP Generation Now!”.

Amakiri stated that, “the time has come for us to replicate the patriotic and resilient spirit of great African leaders such as Sir Abubakar Tafawa Balewa, Dr. Nnamdi Azikiwe, Chief Obafemi Awolowo, Sir Ahmadu Bello Sardauna of Sokoto, Nelson Mandela, Kwame Nkruma, Thomas Sankara, Julius Nyerere, Jomo Kenyatta and Steve Biko just to mention a few who fought for the socio-economic and political well-being of their people. Taking over political leadership at all levels won’t come through endless confrontations with our political oppressors who have refused to listen to us but through a coordinated synergy aimed at ending the reign of political mediocrity that has kept the nation In this state of perpetual backwardness. This can only be achieved by #BallotRevolution.

He congratulated the new executives, officially ratified through the convention of the great party as he urge them to exercise the highest level of patriotism and unwavering commitment to nation-building and the growth of fhe party, which he said remains the only credible alternative.