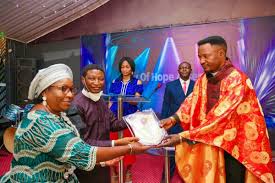 The Executive Secretary of the Nigeria Christian Pilgrim Commission, NCPC Rev Yakubu Pam has been honoured with a distinguished peace award as the man of peace in by the Jos Initiative Group.

The event which took place at Usiju World event Center, Jos attracted high profile personalities from within and outside Jos.

In his remarks at the event, the Executive Secretary of NCPC stated that there would be no meaningful development in Plateau State if the people are not united. In his words,”if we must succeed in Plateau State we must destroy the walls of division’s”.

He stressed that the time had come for Plateau people to retrace their steps and come together in order to achieve a better Plateau.

According to him,”it is not late for us to have a sustainable plan for Plateau State no matter how long it takes to drive it”

He affirmed that, “the set back of today is a mistake of so many years ago” stressing that, ‘we must come together and destroy all forms of division’.

The NCPC boss reiterated the need to have a veritable platform to bring people together to discuss on how to advance development in Plateau State.

He thanked President Muhammadu Buhari for finding him worthy as the Executive Secretary of NCPC.

The NCPC boss equally appreciated Governor Simon Lalong of Plateau State for his humility and love for Plateau State.

He particularly commended his effort by ensuring that Max Air now operates commercial flight from Abuja to Jos.

Rev. Pam further commended the Governor for his support to ensure that NCPC is able to airlift intending Pilgrims from the Yakubu Gowon Airport, Jos directly to Israel.

To this effect, he thanked him for joining the NCPC team at the Yakubu Gowon Airport Jos to inspect facilities at the airport, so as to ascertain the level of progress and challenges.

The NCPC boss thanked the Directors of the Commission all of whom were present at the award event for their team work and unalloyed support for his leadership.

His words,” NCPC is united and will move forward as a family”.

He promised tha he would continue to carry the Directors along as well as all management and staff of the Commission for a purposeful leadership.

The NCPC boss, who is the leader of the Interim Governing Board of Jos Initiative Group said the group is meant to help government achieve its set goals.

He posited that the political class in Nigeria had been dividing us as a people and there had been deficit in social contract as he also averred that corruption had been a huge problem in Nigeria.

Rev. Pam proffered solutions which include the need to come up with a new thinking and the need to have consensus.

He further emphasized the need to restructure the Country and not dividing it.

The NCPC boss however opined that this would pave way to decentralising powers and resources.

He concluded by admonishing that “wherever you find yourself in the position of authority, lets make Nigeria great”.

In his address, the Chairman of the Planning Committee, Dr Daniel Kokong extolled the leadership qualities of the NCPC boss particularly his peace building efforts across the length and breadth of the north as well as his innovative leadership style at NCPC and his sustained peace building in the Plateau.